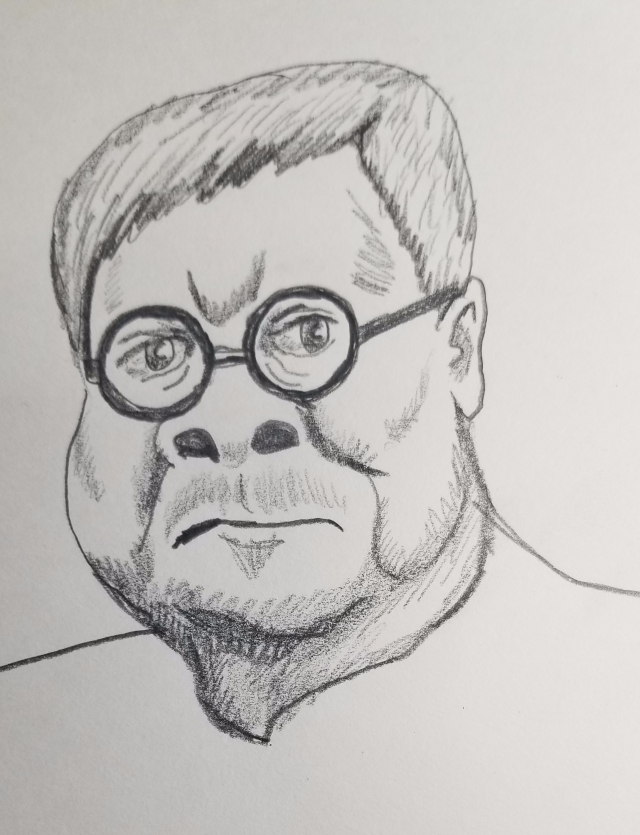 Trump is a flawed vessel for God’s will.  You’ll get no argument from anyone on that score.  His flaws, including an inability to refrain from constant lying and self-aggrandizement, are endlessly on display.  We see this tic constantly because one of his other flaws is a childish need for attention, a need to be the center of attention. Another is his seeming incapacity for the demanding duties he has assumed as the world’s most powerful man.

William Barr, on the other hand, is a highly skilled flawed vessel for God’s will who controls federal law enforcement in the United States of America.   He has shown a zeal to defend the president, no matter what, comparable to the zeal of the fierce zealot lawyers, Defenders of the Faith, who argued to the death the right of the Church to torture and kill heretics in the name of Jesus Christ.   He has no hesitation to make bold, strong, authoritative-sounding pronouncements that are not strictly supported by actual facts.   Because of his power, his zeal, his lawyerly chops, and his Scalia-like devotion to carrying out “God’s will”, he is the most dangerous man in Donald Trump’s revolving, mostly incompetent, crew.

The Department of Justice, created after the Civil War to enforce the rights of newly freed slaves, opened an investigation into the origins of the investigation of the Trump campaign’s entanglements with Russia regarding the 2016 election.  The DOJ, in the Mueller Report, found Russian efforts on behalf of Mr. Trump were “sweeping and systematic”, and though there were many points of contact, even open invitations for Russian help from candidate Trump (jokes, jokes!), Mueller’s team was thwarted in getting sufficient evidence of a chargeable criminal conspiracy between Team Putin and Team Trump.   Several top Trump aides are in prison, or awaiting sentencing, in part over their roles in making sure the DOJ never received sufficient evidence of widespread “collusion”.

Former Attorney General and Trump loyalist Jeff Sessions made the fatal mistake of following DOJ ethics attorneys’ advice and recusing himself from overseeing the Mueller investigation.  After Sessions was publicly humiliated by his boss and forced to “resign”, a snorting weightlifter was inserted into the post temporarily until Trump was able to get his new Roy Cohn confirmed by the Senate. Barr was as good as his promise to Trump during his audition for the job — I will protect you no matter what, so-called damning facts be damned.

“Insufficient evidence” to establish every element of the crime of criminal conspiracy became, after Barr’s authoritative, deliberately misleading public spin in the weeks before he released the redacted Mueller Report, “complete exoneration”.   Mueller immediately protested this distortion, in a letter to Barr. Barr waited a month to disclose Mueller’s letter, giving time for his authoritative counter-narrative to become cemented in the public mind.  The ten instances of obstruction of justice described in detail by Mueller, America was told by the always certain Barr, were irrelevant because the actual crime of obstruction of justice hinges on intent, in this case the intent of an innocent man clearly within his rights to be understandably enraged by an unfair partisan investigation against him and to do whatever was within his considerable powers to stop it.

The zealous defender of  Trumpism is at it again.   The recently released report concluded the DOJ investigation (begun under Obama) into Russian influence in Trump’s campaign was not motivated by bias or political animus against candidate Trump.  It also noted at least 17 “significant inaccuracies and omissions” in how the FBI obtained the original FISA warrants to surveil four Trump aides.  It should be noted that the investigation, once it was pursued by the Independent Counsel, ultimately led to numerous convictions of top Trump aides and a raft of indictments of Russians beyond the reach of American law.   Of the four initial targets of the FBI investigation that the DOJ Inspector General  investigated, three have pled guilty or been convicted of related crimes.

Barr announces that the DOJ report concluded that the “intrusive” investigation was opened by the FBI on the “thinnest of suspicions that, in my view, were insufficient to justify the steps taken.  He also called the investigation  “completely baseless”.   He is not buying the conclusions of Inspector General Michael Horowitz until Barr’s own investigation of possible criminality by investigators and other members of Mueller’s team is concluded.

“From a civil liberties standpoint, the greatest danger to our free system is that the incumbent government used the apparatus of the state, principally the law enforcement agencies and the intelligence agencies, both to spy on political opponents but also to use them in a way that could affect the outcome of the election,” he said [of Obama’s “spying” on the Trump campaign –ed.].

Barr  said, among other things:

“I think our nation was turned on its head for three years, I think, based on a completely bogus narrative that was largely fanned and hyped by an irresponsible press, and I think that there were gross abuses of FISA and inexplicable behavior that isn’t tolerable in the FBI,” Barr told NBC News.

“[Horowitz’s] approach is to say, if I get an explanation from the people I’m investigating that is not unreasonable on its face, then I will accept it as long as there’s not contradictory testimonial or documentary evidence… And all he said is people gave me an explanation. And I didn’t find anything to contradict it. So I don’t have a basis for saying that there was improper motive. But he hasn’t decided the issue of improper motive,” Barr said.

source for both quotes

Barr dismisses the findings as the easy conclusions of a cursory and inconclusive look into what he considers possible, even likely, “bad faith” by the FBI.  It matters not a whit that, as he frankly concedes, he has no basis for saying there was an improper motive for the FBI probe, he just knows it because… God told him.

Indeed.  Remarkably, Trump says exactly the same thing about the latest baseless, sick, illegal witch hunt against him.  Who are you going to believe, a dense 435 page report by a partisan bureaucrat intent on letting his suspiciously error-prone colleagues off the hook or the clear words of the unambiguous leader of the Free World and his top law enforcement official?

If only the Democrats had the spine to impeach Mr. Trump for his seamless pattern of obstruction of justice as well as his many other misdeeds as America’s Top Executive.   Why are the findings of the Mueller Report a dead letter?   Barr said so, unequivocally.   The Democrats, it seems, made a political calculation about the uphill nature of that fight against America’s top lawyer and the impossibility of getting Americans to tune back into that “old news”.

Too bad impeachment of Barr is off the table, that would be a great show, watching the most dangerous man in America wrestling other lawyers like the snarling, heavyweight, snarling alligator he is.   I’d watch that shit show gavel to gavel.

Barr also reiterated his opinion that the FBI did not have enough evidence to open up a full investigation into the Trump campaign in 2016 — which diverges from the conclusion reached by Horowitz.

According to the Horowitz report, the FBI investigation — codenamed Crossfire Hurricane — was opened exclusively on a tip to the FBI from an Australian diplomat that George Papadopoulos, then a foreign policy aide on the Trump campaign, had displayed knowledge of a possible plan by the Russians to release information damaging to Hillary Clinton.

In the interview, Barr dismissed Papadopoulos as a “28-year-old campaign volunteer” and suggested that the information he communicated could have been conflated with contemporaneous news reports about Russian hacking.