If you are Individual 1 (and, in fairness to his anonymity in the DOJ filings, we know only that he is an American president who came into office at the end of 2016) you’ve lived a life in which you were always number one, and never accountable for any reason.   As an eight year-old you were already, personally, a millionaire with all the rights and privileges appurtenant thereto.  You never had to meet or interact with poor kids, working class Greeks, Jews, Chinese, Negroes, Hispanics (these used to be called, back in the ignorant days, “scum”, Greeks, Kikes, Chinks, Niggers— er, sorry, I mean n-words… N-words, sorry, SORRY, God help me, Spics).  You never developed the antibodies to deal with the many diseases purportedly carried by these types, never learned to play with people who were not born-rich like you, never learned to judge anything on any basis but how much money was in it for you personally.

As an adult you might have had the most successful casino in a casino town.   To give your first wife something to do, to keep her busy while you screwed a bimbo who would eventually become, for a short time, your second wife, you might have built a second casino in the same town for her to personally manage.  Wife one would manage your second casino well and it too would become a gold mine.  And then, because there had never been any consequences for any of your previous errors ($400 million from dad and a team of good bankruptcy lawyers will go a long way to covering one’s ass), and because your ambition knows no reasonable bounds, you will borrow close to a billion to build the mother of all casinos, in the same casino town.  That giant casino (the worlds’ largest), will quickly put all three out of business (not to mention the many local businesses your bankrupt casinos will stiff and put out of business).   Big deal, really, nothing to see here.  Truly, do you all really get it?  NOTHING TO SEE HERE!

So while I do, in a twisted way, feel a tiny bit bad for this guy, as the walls close in, you know, with this “perjury trap” for Individual 1 (a trap that can only work, by the way, if you lie under oath, or can’t help lying because, really, seriously, what fucking difference has it ever made?) there is really a kind of poetic justice side to it.   It’s wise not to put too much faith our justice system, a system built by the super-rich to serve themselves first, food from a different, more discerning kitchen than the rest of us eat from, or in the punishment of the most destructively evil among us, but I can’t help seeing just a little beauty in the recent implication of Individual 1 in the felonies of two close associates who have, under oath, dragged poor Individual 1 into their felony messes.

And now, a few words from the sworn testimony of the guy who was Individual 1’s first choice for his second Supreme Court nomination, a supremely unqualified man (based on his own tantrums, partisan rage and unabashed weaselishness during his confirmation hearings) I will identify, in the interest of fairness and full transparency,  only as Individual 2.   At the bottom there is a line I muse about now whenever I consider how a man can behave despicably toward women.

It is literally inconceivable that anyone but Individual 1 would thrust Individual 2 to sit, by the barest of partisan majorities, among the final arbiters of what is lawful and what is not lawful in a nation he claims to love: 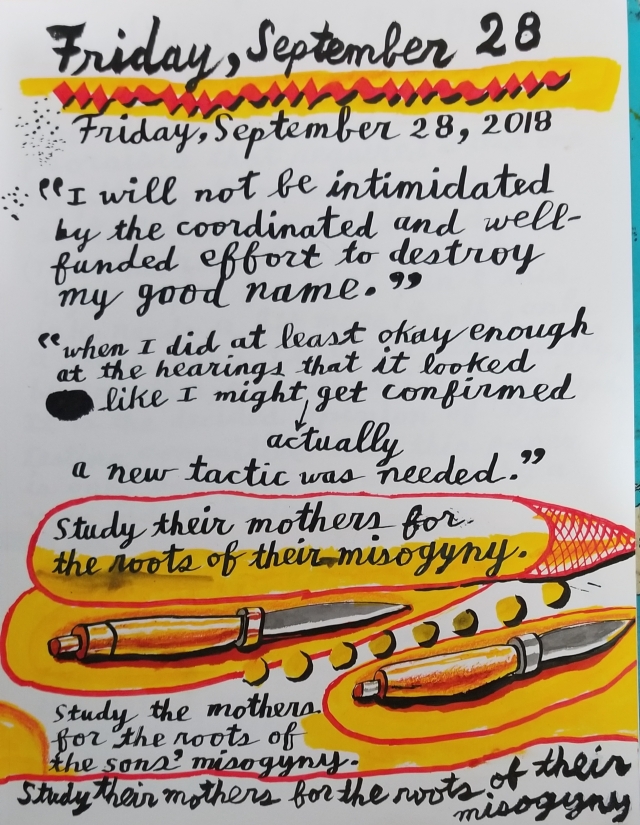