I am, apparently, not the only one currently reading Hannah Arendt’s massive and fascinating The Origins of Totalitarianism (there’s a line waiting for it at the NY Public Library).  It may actually be back on the best-seller list, for reasons impossible to fathom.   One of those accidents of history, I suppose.   Sekhnet alerted me to Krista Tippett’s great interview with a British academic and author, Lyndsey Stonebridge, who recently re-read Arendt’s collected works and wrote an article on Hannah Arendt.   You can hear their conversation HERE and, bless Krista, there is also a full transcript of their edited chat.

“What prepares men for a totalitarian domination” — and here, again, is what happens in the human heart and psyche and society that makes these things possible — “is the fact that loneliness, once a borderline experience, usually suffered in certain marginal social conditions like old age, has become an everyday experience of the ever-growing masses of our century.”

Loneliness, which has multiplied exponentially in our cyber age.  Loneliness and the disconnection that leads some to despair, tens of thousands of Americans annually to death by drug overdose, gunshot, hanging, suicide by police, by drunk driving.   Loneliness, which makes people join mobs, if they get the chance, chanting idiotic slogans by the flickering light of Tiki torches.

Loneliness, which has been monetized by shrewd fucks like Mark Zuckerberg (to the tune of $74,000,000,000 personal profit and counting) and organized by algorithm into potent personalized political propaganda delivery, instantly to your pocket, or bedside, with a little notification beep to remind you it’s waiting.     Loneliness is the source of much human misery, and, as so often with massive human misery, there’s gold in that misery (think of slavery, Imperialism, the coal mines, the original factory system).

Here, at the oddly placed footnote below, Krista and Lyndsey Stonebridge talk about the power of a provocative lie versus the feebleness of factual truth in politics, something that has an unaccountable relevance at the moment, though, again, hard to put my finger on why.   [1]

I need to read more about Hannah Arendt’s life, her soul calls out to me from another world.   I feel she is a precious wise ancestor I’d be good friends with.   I recall her description of an assimilated nineteenth century Prussian Jewish woman of great wit and charm, one Rahel Varnhagen,  who held a salon where actors and other artistic and intellectual misfits gathered.    Of Rahel Varnhagen Arendt later said, (Wikipedia informs us)  that she was “my very closest woman friend, unfortunately dead a hundred years now.”[13]   I have similar feelings about Hannah Arendt, though she’s been dead far less long so far.    Here   is a nice short piece about my dear friend Hannah, with numerous linked quotes and articles.

Here is what she thought about thinking:

MS. TIPPETT:  … And honestly, Americans have a very conflicted kind of relationship, historically and philosophically, with thought and ideas. It’s a different thing than it was, for example, in the Germany that Hannah Arendt was raised in. The power of ideas. But it feels to me like there might be a receptivity now precisely because we see that it’s not getting us anywhere to be meeting my emotion with your emotion. Her — as you say, you can only have moral imagination if you also think, if you are thinking.

You talked in this podcast I heard you in that brought me to you, In Our Time, about how she always talked about the dialogue we have in our heads, that we are constantly working out what it means to be human, to be a person, whether we realize it or not.

MS. STONEBRIDGE: Yeah. She took this from Socrates and then from Heidegger, but her sense of what it meant to be a thinking person was always to be having the two-in-one dialogue in your head, that thinking wasn’t about mastery. It wasn’t about thinking about stuff in order to control it or to rationalize it. Thinking was a way of being.

The passion of being was in thinking. And that comes from that two-in-one dialogue in one’s head.  And for her, that was the beginning of moral life, that dialogue.

There also follows — there is a notion of judgment that comes through thinking and dialogue. And the ability…

MS. STONEBRIDGE: Well, thinking, she says, is not the same as judgment, but it creates the right conditions for judgment. But also, she says, if you can’t have that inner dialogue, then you can’t speak and act with others either because it’s part of — if you’re already divided in yourself because you’re having this conversation with yourself, and that’s the passion of your being, people who can do that can actually then move on to having conversations with other people and then judging with other people. And what she called “the banality of evil” was the inability to hear another voice, the inability to have a dialogue either with oneself or the imagination to have a dialogue with the world, the moral world.

The inability to hear an opposing view, a voice not your own, to imagine an experience you have not personally encountered.   The abiding curse of our fucking times. 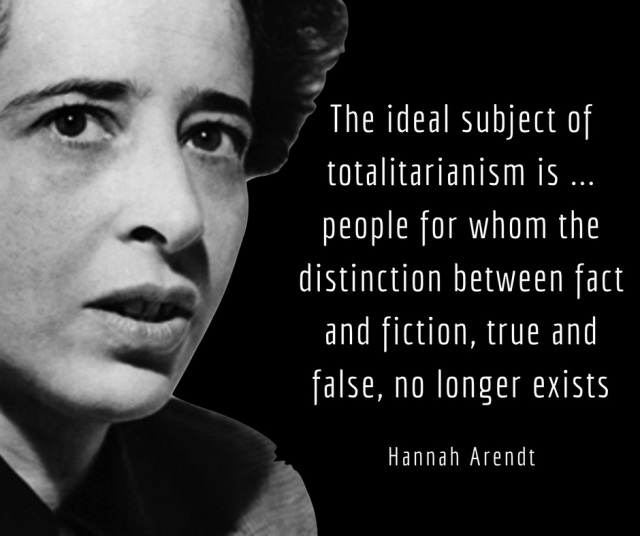 [1]     MS. TIPPETT: We’re going to have to wind down here, but I’ve got so much else I want to talk about. But I want to talk briefly and this follows on that idea of lying. Which was one of those elements of totalitarianism, very much a subject alive in American politics now. But something I’m very intrigued getting a little bit deeper into this, and reading her — and I’ve thought a lot about — like a lot of things right now, it’s just out on the surface, what was already kind of fermenting. We already had a crisis of truth, or not being able to speak about truth in a complex way. And we’ve been relying on facts, and facts were never enough. And she makes these — like, here’s her essay “Lying in Politics.” She says that “factual truths,” here’s that. “Factual truths are never compellingly true. The historian knows how vulnerable is the whole texture of facts in which we spend our daily life. It is always in danger of being perforated by single lies, or torn to shreds. Facts need testimony to be remembered and trustworthy domain of human affairs. From this it follows that no factual statement can ever be beyond doubt.” Take us inside that and what that means for us now.

MS. STONEBRIDGE: For Arendt, I think why the idea of thinking and speaking as a form of action are important to her is that what she’s saying there is, you can throw enough facts, you can throw all the facts you like at people, and they will not stick. We had this, in the U.K., and I know you have, too, that it’s — “OK, against the false news we’ll have fact-finding, and we’ll tell you.

And we’ll have a team of researchers, and you just have to look on our website, and we’ll tell you which of those are lies.” And you can scream facts at people until you’re blue in the face, and a lot of colleagues and universities and journalists have been doing exactly that very hard, working tirelessly. And it’s not making any difference. And I think what she’s talking about there is the ability through thinking and communal discourse, to make truth meaningful in the world, it has to happen between people. Which is not saying we just make up our own reality. She’s not saying that. It means that this is why…

MS. TIPPETT: When she says testimony, it needs…

MS. TIPPETT: It needs experience. It needs human experience around it.

MS. TIPPETT: Yeah. We need three dimensional — we need stories and facts and conversations between people and all of that working together. Right?