In spite of the generally accepted idea that a feral cat, once it reaches a certain age, will not allow itself to be touched by humans, we have a feral cat, Mama Kitten, who at first would not be touched and now very much likes to be petted.   On her terms, of course, being a cat, but nonetheless, quite affectionate when the mood is on her.  She came by this gradually, sitting near us when we were outside, showing her newborn kittens to Sekhnet in the garden, coming closer, rubbing against us, eventually letting herself be touched.  We fed many of her kittens off a spoon, once she weaned them.

She is a beautiful cat, and a prodigious survivor, who, starting at six month’s old, has given birth to perhaps twenty kittens.   She is a good mother, until it is time to push the latest brood out of the nest, to attend to the next.  She can be quite savage driving off the surviving kittens when the time comes.   Sekhnet, applying human morality (oxymoron?) condemns the little survivor as a bitch when she turns savagely on her children.   In a better world we’d adopt Mama Kitten, get her spayed, make her an indoor/outdoor cat, extend her life by years, etc.   This is not, of course, a better world.

Here are three of the latest batch of four, lounging on the ramp outside the back door from which, periodically, human servants emerge, opening cans of food.  There are a few such cans on the right side of this recent photo by Sekhnet. 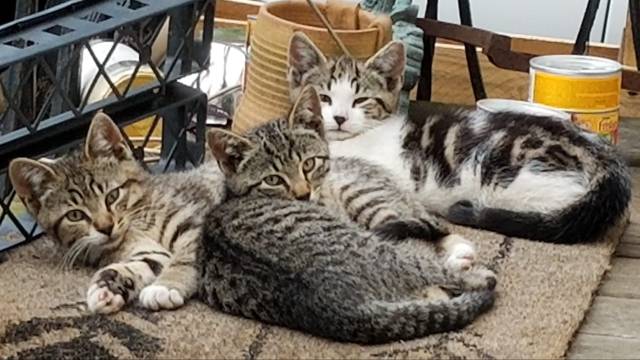 We generally don’t give these beautiful little strays names because every time we get attached to a particular individual he or she disappears.  Sometimes there is a bad smell in the garden and we find a tiny corpse under a bush.  More usually the kittens are whisked off without a trace, to become meals for the local hawks.

Yesterday, strolling back from Cunningham Park just before sundown, I passed several groups of cats, a lounging mother and two or three kittens playing under a bush.  The kittens watched me as I approached, scurrying for cover as I got close.   Their mothers eyed me warily until I was a safe distance away.    Their looks said “that’s right, motherfucker, continue to carry your ass on down the street and stop looking at my children, you sick bastard.”

I recalled the debate Jonathan Franzen was involved in at one time, about wiping out the colonies of feral cats that kill, as it turns out, not thousands but billions of local birds and rodents every year.   Often for sport, it appears.   Sekhnet once saw Mama Kitten take down a finch, leaped up and tore the little yellow bird out of the air.  “I hope she’s teaching her children to hunt,” she sometimes says when she laments that we are not always around to feed them.

It’s a brutal world out there for animals in the wild.  Even more brutal, I suppose, in areas where humans have remade the natural world, turning local species into cagey outlaws.    This brutality has been escalated (like a consumer complaint to any corporation, only for real) by the needs of the world’s top predator, homo sapiens, until not that long ago another insignificant and desperate prey animal, living by guile, as ruthless as necessary to survive.   I’d love to be able to live without making constant judgements, the way I don’t judge Mama Kitten, but, as you may have noticed, greedy, ruthless, ignorant, loud talking motherfuckers will not give it a rest.

These are three very cute kittens, though, no?