“Is it really fair to call me a bully?” asked the skeleton of my father, from his grave outside of Peekskill.

“Well, nice to see no equivocation, I suppose,” said the skeleton.  “I assume you have this whole thing worked out, how Uncle Aren and his wife bullied my mother, how she bullied me, blah, blah, blah….”

Actually, I had something else in mind.  With a bullying maniac in the White House, someone who sees the world as black and white, the way you always did, someone as intent on winning…

“Or actually, intent on not losing, as you pointed out a few weeks ago.  The battle is not really to win, it’s to not be defeated again.  That’s a genuine insight you had right there, Elie.  People who divide the world into winners and losers, black and white, good and evil, are desperate not to find themselves on the wrong side of that cruel chasm.  Their self-esteem is tied to never being beaten again.   They’re desperate not to be what they think of as losers.  If the world has no nuance, you are either loyal or a traitor.”

All true, as far as I can see.  Anyway, having experienced that kind of upbringing, by a parent desperate never to be wrong, who bellows ‘it’s my way or the highway’ when he feels cornered, I have a certain understanding of this despicable creature we have dominating the news like an eternally crying baby with a voice as loud as an atom bomb.

“Are atom bombs really loud?” said the skeleton.  “You should probably run that one by Jeeves, Elie.  What if the mushroom cloud is supremely silent as it melts all life within its radius?”

I take your point, but I don’t give a shit.  I had some thoughts about the psyche of this clown president, after seeing a short, well-done documentary about his family history.   The film was called Meet the Trumps: From Immigrant to President.   A 47 minute 2017 BBC production I saw on Netflix yesterday, and recommend  highly.

“Do tell,” said the skeleton, with a yawn, or a silent scream.

Trump had an older brother, Fred Jr., Freddy, who was bright, good looking, fun-loving, interested in others, beloved.  Fred Christ Trump senior, an immense piece of shit, as far as anyone can tell, a guy who ruthlessly took advantage of government contracts for middle class housing to enrich himself obscenely, if arguably just within the letter of the law (he settled a federal discrimination suit agreeing not to violate the Fair Housing Act, without admitting he had), was grooming Freddy ascend to the throne of the Trump Empire.  Freddy cruelly disappointed his father by siding with the tenants of a building Trump owned and putting in new windows for them.  This inexcusable breach of business ethics demonstrated to Fred Christ Trump that Freddy lacked what it took to lead the House of Trump.

Frederich Trump, Fred Christ Trump’s father, had made a small fortune by sheer audacity at the turn of the twentieth century.   He came from Germany (at sixteen to seek his fortune, the second time because he’d been deported from his homeland) to become an American immigrant success story.  He died fairly young, leaving a nice nest egg that his oldest son, Fred Christ, turned into an actual fortune after becoming head of the family and surpassing the entrepreneurial accomplishments of his bold, entrepreneurial father.

In the documentary they take a moment to follow the tragic demise of Freddy Trump.  Never suited to life as a ruthless corporate titan, he left the family business and became a commercial pilot.  At some point he lost that job, possibly connected with an increasingly intrusive alcohol habit.   He wound up working as a maintenance man in some Trump apartment building.  Then he finished drinking himself to death, and died, at 43.

Meanwhile, Donald, who’d shown an increasing mean streak as an adolescent, had graduated from the military academy he’d been sent to to man him up.  To build up his self-esteem while he was at the academy, his parents, Fred Christ and Mary, would bring a pretty girl with them every week when they visited Donald.  The girls looked like models, noted a former classmate of Trump’s, possibly because they were.   Donald would be photographed posing with this succession of good looking young women and went on to win the all-male academy’s Lady’s Man award.   Shades of The Apprentice, I thought when I saw that.

At twenty-five, with his father under investigation in Congress for shady business practices,  Donald was appointed president of his iron-willed father’s real estate empire.  He soon found himself under the stinking wing of a truly notorious piece of shit, vicious, closeted gay homophobe Roy Cohn. [1]  Cohn, among his other notorious works, represented the dons of the five crime families and became Donald’s consigliere and mentor, before losing a four year battle against disbarment and dying of AIDS.

In 1981 Freddy died.  There’s a clip of Trump describing his brother.   It is striking how uncharacteristically human his tone is, how clearly full of love he is describing his big brother.    He laments that his father, and he, pushed Freddy into a life he wasn’t cut out for, then goes on to explain:

“… I had a brother who was an extraordinary guy, he was an absolutely brilliant personality, he was handsome, he was wonderful, people loved him, he was nice, he confided to everybody, he was truly a nice human being….” Then he springs the trap shut, in characteristic fashion: “… and people took advantage of him.”  The lesson he learned from his wonderful brother’s life and death is ‘don’t be too nice, or people will fuck you.”

Years later the demented Fred Christ would agree to cut Freddy’s heirs out of his will.   Donald took the opportunity to give a final fuck you to his beloved too nice loser brother’s family by cutting off promised money to pay for medical care for Freddy’s grandchild, born with cerebral palsy.

“I understand that up there, above the ground, it is impossible to resist talking about, thinking about, bitching about, this giant, stinking pantload you have in the bully pulpit.  Makes me glad I’m already dead, I have to say. But this shit-smear too shall pass, along with the 32% who say they don’t regret having voted for him.  They all pass, the Roy Cohns and Freddy Trumps alike.

“I know it’s not all in your hands, not entirely a matter of your will, but I wish you could somehow focus on finishing a nice sample of my story to send to agents.  Get an agent, Elie, before it’s too late.  Find a nice ten page sample, print it out, and send it to a dozen agents, and a few literary rags while you’re at it.  That’s how you avoid being too nice and having people take advantage of you.”

It’s my way or the fucking highway, dad.  You like that fucking dirt bed you have there?  Good, then be quiet and go back to sleep.

“Yah-vold, mein herr,” said the skeleton, giving a feeble Nazi salute and slouching back into his grave.

[1]  Some readers (Jews in particular) might find this review of two biographies of Cohn the reviewer waded through, disturbingly fascinating. 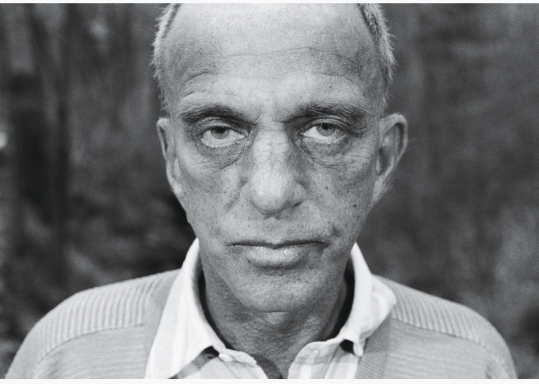 (above) the self-hating Roy Cohn, living picture of Dorian Grey.