Back to that baby, my father, born on June 1, 1924.   It was a hard birth after a no doubt stressful pregnancy, the tiny mother struggled to give birth to a very large baby.   The mother had lost her previous child shortly after birth and must have been undergoing tremendous emotional turmoil.  The family was very poor, the horse that pulled the herring wagon may have already died, for all we know, and, if so, the breadwinner was winning no bread.  Crime was rampant on the crowded Lower East Side where they lived, violent criminals were organizing into a national syndicate to profit from Prohibition which was already proving to have been a massive mistake.

The second time was the charm for my grandparents, the big baby survived.   It was three of them now in the tiny, hot slum apartment during the airless summer of 1924.   What could go wrong?

My grandmother’s older brother Uncle Aren intervened, packed up the family’s belongings in his truck and they made the then long trek up to Peekskill, where Aren lived.  When this happened exactly is unknown.  My uncle, who was fifteen months younger than my father, may have also been a tiny passenger on that trip up the Hudson River, past Sing Sing prison.  Aren’s son Eli, freshly expelled from DeWitt Clinton high school shortly before graduation, helped the little family pack up and move.

Aren installed the little family on the second floor of a three story house he owned in Peekskill.  Little comes down to us about those first years in Peekskill, except that when Eli moved there around that time he had an altercation with the three Ku Klux Klan member sons of the guy who ran the local hardware store.

“So you’re the new kyke from New York City,” Eli said they greeted him, blocking his way on the sidewalk in front of their store.  “I dropped the biggest one, stepped over him and said ‘Eli Gleiberman, nice to meet you guys’.  They didn’t bother me after that.”

“Eli’s full of shit!  He’s a completely unreliable narrator and a notorious reviser of history” my father always insisted, particularly after I began visiting Eli regularly.   Maybe so, but many of his stories had the ring of truth.   Eli was menacing and physically formidable even at 85.

What we can establish, with simple arithmetic, is that my father started school just as the Depression was kicking off.   In September 1929 the boy was five.  His school career didn’t start off well since he didn’t speak any English and he was legally blind.  Outside of that, he probably had a pretty normal adjustment to school.  Here is a picture of him, one of very few from his childhood, that was taken during his early school years.   That’s dad in the middle. 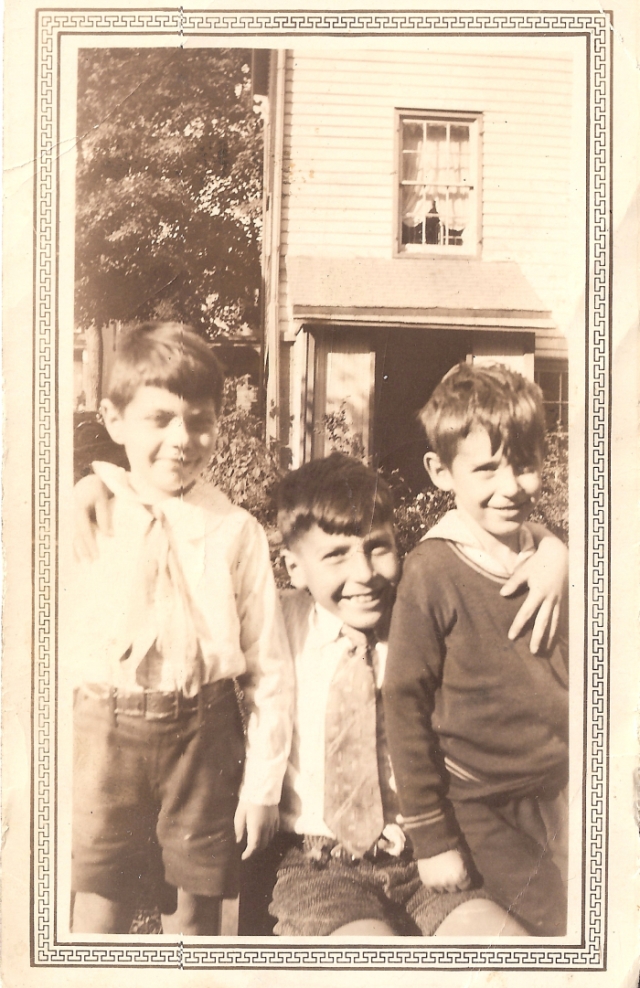 “Who’s that kid on the left?” I asked my uncle, sometime after my father’s funeral.

“That’s Henry,” he said immediately.   Henry moved away from Peekskill shortly after the picture was taken, my uncle said, and does not figure further in my father’s story.

We note that young Irv is still not wearing glasses.  He’s smiling, looking at the camera, seemingly everything is fine.   He’s affectionately draping his arms over his friend and his little brother.   All appears right in the world at that moment, during that literal snapshot of time.   It’s probably fine.