Humans are fallible creatures, we make mistakes from time to time, even the smartest of us.   Often our mistakes are purely emotional ones, if we’d thought more carefully at the time we wouldn’t have done what we’ve come to regret (or, just as commonly, cover up).  We know we were wrong, thinking back on it honestly, but at the time we couldn’t help doing it — we felt it was the right thing to do.  The moral question is what do you do when you realize you were wrong (assuming you are capable of such self-assessment).

There is a common type, particularly in a competitive, litigious society like ours, who will never admit wrongdoing of any kind.  Corporations are one example, never, ever admit wrongdoing without a viable lawsuit brought against you, and then, settle with no admission of wrongdoing.  We all know this type.  Their defenses are familiar.    If, once, in a rage, I threatened to kill you, your parents and your children, in a very specific, detailed way, IT WAS ONLY ONCE, YOU MERCILESS FUCK!   If an investigation found insufficient evidence of my crimes, because I was largely successful in covering them up– THEN FUCKING SHUT UP ABOUT WHAT YOU COULDN’T ACTUALLY PROVE I DID, LOSER!

The categorical refusal to yield is a terrible thing to be up against.  There is no possibility of resolving anything, except by accepting an unacceptable version of events.   When we are wronged we’d like the other person to at least acknowledge “my bad.”  That simple acknowledgement goes a long way, can stand in for an apology, in a pinch.   I realize this is a regular theme of mine, the difficulty of reconciliation, and a perhaps it’s a bit of a tired theme, but Yom Kippur and current events both remind me of it.

I think of recently dead Mark, whose ashes his brother and I scattered in his favorite lake last week.   I don’t want to think further about his exasperating and tragic life, but there are apparently emotional loose ends I still need to tie up.   His chief characteristic was a refusal to yield.  That, above all else about him, marked him for a life for constant conflict, rage and eventual betrayal and/or repudiation by virtually everyone.  There was no compromise in him.   Here is a snapshot of his life, the album cover photo for the LP of a life of great expectations and even greater disappointments: 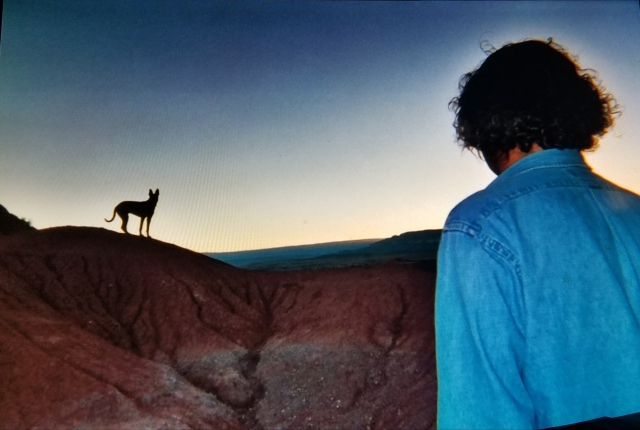 When Dubya Bush and Cheney were president, their steadfast refusal to ever take responsibility for their own fuck-ups always reminded me of this guy.   It was categorical.  Nothing bad was ever their fault, and if they were ever called on anything they insisted on setting the rules for being interviewed:  they’d take no oath to be truthful, no recording or note taking allowed, absolute blanket secrecy about anything they said.

When Trump was elected by the Electoral College in that massive 78,000 vote nationwide landslide, he was Mark even more to a T.   He has the body posture down perfectly — the arms crossed across his chest, the surly expression on his face.   The picture of childish churlishness.

Here’s a bit of how the thinking by this type goes.    If you have a small business, and your most loyal, long-serving employees work for low wages, and often work many hours of overtime without extra pay, and you hit it big with a startup and suddenly have millions of dollars … what does one thing have to do with another?   It’s true, during the years when you were eking out a living from your business, rolling nickels and dimes and taking them to the bank, every dollar you didn’t pay your workers went into your pocket.   Then your pockets were overflowing.  SO?   I repeat:  WHAT DOES ONE THING HAVE TO DO WITH ANOTHER?

You avoid any kind of moral consideration of your behavior by reframing the accusation so that there is no reason to yield.   And you can make a good argument.   Business is one thing, personal wealth is another, clearly.  In business every dollar of profit you make first goes to ensure the health of the business, something your workers have no worry about.  Personal wealth is another thing entirely, particularly if that wealth is not derived from your business.   The exploited workers were free to quit any time they liked, nobody literally held a gun to their head.   A wise $30,000 investment in a start-up that blew up a hundredfold has nothing to do with that other thing, nothing whatsoever.

I’m not going to bother bringing our Mark doppelganger president into this, the examples are too plentiful and too well known to bother recounting here.   If you have time, as I do, I highly recommend a podcast called The Report [1],  a thorough run through of the dramatic story told in Mueller’s dense, long report, with readings of pertinent parts and illustrative sound bytes from people involved in the campaign’s collusion with Russia (collusion, yes, chargeable criminal conspiracy — insufficient evidence)  and obstruction of Mueller’s investigation.    Listening to the details, particularly in light of recent headlines, you will have repeated “aha!” moments and come to understand the full perfidy of Bagpiper Bill Barr, another grim example of the utter refusal to yield, ever, on anything.

The refusal to yield, no matter how strong the moral or legal case against you, is the mark of mobsters, sociopaths, tyrants and fanatics.   We can understand it comes from insecurity, weakness, terror — but still.   Let’s call it what it is: fucked up.

For the past several weeks, a group of us has been working on a project to tell the story of the Mueller Report in an accessible form. The Mueller Report tells a heck of a story, a bunch of incredible stories, actually. But it does so in a form that’s hard for a lot of people to take in. It’s very long. It’s legally dense in spots. It’s marred with redactions. It’s also, shall we say, not optimized for your reading pleasure.

Various folks have made efforts to make the document easier to consume: the report is now an audiobook; it’s been staged as a play; there have been live readings. We took a different approach: a serialized narrative podcast.