I know, it’s so easy to dump on poor psychopaths.   There is a presidential order to use tear gas at our southern border to repel asylum seekers and their children trying to exercise a lawful right after fleeing monstrous conditions in their home countries.   Nothing to see here, why go straight to psychopath?   So judgmental!

It turns out Obama did the same thing, using tear gas at the border dozens of times, when he was, fairly, called Deporter-in-Chief (he set a record) and Trump just increased its use, months after infamously separating children from parents and detaining them in desert tent camps, like the ones pardoned criminal comtemptnor Joe Arpaio used to use [1].  Using tear gas against lawful asylum seekers finally made headlines recently, after an escalating series of hysterical claims by the president about the criminality, terrorism and infectious diseases of this horde of filthy asylum seekers.

I’m not saying either man is a psychopath, but I’m not saying they’re not!  These American presidents could simply be poor victims too, like the woman gang raped by members of a drug gang in her country and fleeing with her daughters, choking on tear gas near the border of a country promising a better life for victims of persecution, or maybe not!

Everyone can understand, I suppose, that these things are complicated.   The U.S. has supported some very vicious leaders in Latin America (let me not call them psychopaths, some are the finest people, people are saying that, they really are, fine people, the finest people) for many years and looked the other way as Death Squads, working for these “strong men”, murdered political opponents including nuns and priests, even an archbishop (now a saint) [2].   Harsh American drug laws, and a militarized war on mood-altering medicines not synthesized by American pharmaceutical giants, play a large role in much of this deadly violence south of our border.  People are fleeing from those violence and poverty ravaged countries now, toward political asylum in the US.   Complicated!

Psychopaths are often highly intelligent, we hear, known for their cunning.   Intelligence unrestrained by conscience or ethical consideration of any kind is a scary thing.  Which brings us to the most successful and profitable exemplars of this type, the fictive “persons” known as corporations.  Corporations, today, have almost universal influence over everything that happens on this endangered planet.

The examples of corporate barbarity are too many to even summarize here.  Tax subsidies for oil companies, a relatively benign seeming thing, comes to mind.   A highly profitable, outmoded, biosphere destroying way of producing energy– reaping huge tax breaks from a pliable American government, along with record profits.   Let’s be honest though, the oil companies are no worse than the tobacco companies, the fast food/diabetes and heart disease industry, the industrialized hormone-rich meat industry or many other highly lucrative industries that merely provide what people want and need.   I am one judgmental motherfucker– what next, attacking the life-saving pharmaceutical industry?  Maybe I am the psychopath.

I offer this one recent example and I’m out of here.   I had a robocall from Spectrum, a monopoly provider of internet service in my area, demanding payment of some overdue fees.   When I called back the robot informed me that the minimum payment I had to make was twice my monthly rate.  Thirty minutes on the phone with their representatives and nobody was able to inform me exactly what this giant charge was for.   All they could tell me was that if I didn’t pay every penny of the entire amount my service would be terminated, automatically, by some kind of automated process.

I called back late last night, spoke to the night crew.  Rebecca was very nice.  She pulled up my record and saw at once that half of that charge was for a “trouble call” on October 3.   A technician had been sent to my apartment, after I’d protested that the previous technician, a month earlier, had found no problem with the line or the modem.  “It’s the only thing we can do if your intermittent service continues to be an issue is to send another technician out to you,” I was told.

How was it a valid charge, without notice, without my knowledge, without anyone following the company’s own rules for charging a customer for a repair visit he resisted and was told was his only option?    Here we have the beauty of the corporate “mind” at work.

It’s a valid charge, Rebecca explained, because it is the company’s policy to allow the technician to determine whether the customer should be charged or not.  If there is no problem found the technician has the discretion to assess the $45 fee.

The technician, I told her, had not informed me of any fee, only warning me that a future visit might include a fee and that I should be careful and check in advance to find out if I was going to be billed for the visit.

Each technician visit, she informed me, costs the company about $200.  I told her the visit lasted fifteen minutes and it was hard to believe the technicians, even the scab technicians the company currently employs after the CEO refused to negotiate with the union, made anything like $800 an hour.   She agreed that they probably made less, and I realized she was talking for the recording of our call, playing to her masters who would hear the tape if there was any question about what this pain-in-the-ass customer had said and whether she’d been loyal to the company bottom line.

I told her that the 5,000 words of legalize in the terms and conditions, a document nobody reads as they agree to the take it or leave it terms, used to be known as a ‘contract of adhesion’.   That is a one-sided “take it or leave it” deal giving all rights to one party, the more powerful one, and no choice to the other party.  Thirty years ago courts could still invalidate contracts of adhesion.  Now it is simply the way every corporate “agreement” is written and the courts don’t care any more.   John Roberts, Chief Justice of our Supreme Court, was a trailblazing genius of corporate law who innovated many of the devilish now perfectly legal details of our new corporate age.

I told Rebecca I was disputing the charge.  Rebecca told me that I could not dispute a valid charge.  I asked her if she understood how maddening that circular logic was.   She told me she was sorry that I feel that way.   I told her I was aware that we were being recorded, that she had to be careful about what she said, but that she would feel exactly the way I feel if the same thing was done to her.  I laid it out concisely, with extreme patience.  In the end she admitted she would probably feel exactly the same way I did, which gave me the only victory I would have in that call.

Alex, the supervisor, called me a half hour later.   He explained that because this charge had been assessed by “technical” that he had no ability to override it since he worked in “billing”.   You dig the genius of this?  Same company, different walled off areas of the corporate brain.  Alex and I spoke for a long while, and he was even more sympathetic than Rebecca.  He could see the two service calls, and the credits for intermittent internet service before and after each call.

Alex offered his theory for why internet service in New York City sucks so much, and it made some sense to me.  He lives in suburban Colorado, gets his internet from Comcast and because of the lack of density and interference, he rarely experiences the intermittent outages that plague customers in congested places like New York City.  He could not have been nicer, more sympathetic, more conversational.   But as for the question of the arguably unfair valid charge, he was, unfortunately, powerless to remove the charge.

I told him I was disputing it, but that I was prepared to pay the rest of my outstanding bill to avoid an interruption in service.   He told me not to bother, if every penny of every valid charge is not paid, literally down to the penny, the service will be automatically cut off at a date certain, a certain number of days after the past due time bomb goes off and the automated disconnect signal goes out.

He told me he could “escalate” my challenge of the charge by emailing the technician, a scab named Stan (who left me his cell phone number), Stan’s supervisor, and the supervisor one level above the technician’s supervisor.   They would have to produce a work order, signed by me, that showed I’d been informed of the valid charge.  It could take a week or so to get it sorted out, he said he’d call me between 8 and 10 pm on Monday.  I thanked him.   Alex asked if I had any other questions.

I did, and for once I got a quick, straight answer that made complete sense.  My service will be automatically cut off at 4 a.m. on December 14th if all valid charges are not paid before then.

I’d better renew my health insurance before that date, is all I can say.

Charter Communications (Spectrum)  chairman and CEO Thomas Rutledge received compensation worth $7.8 million in 2017, following his $98.5 million take for 2016 and $16.4 million in 2015, according to a regulatory filing.  (this comes straight off a google search).

And a handsome rascal too! 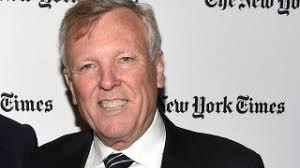 Would you negotiate with a striking technician’s union, determined to keep all of their health plan benefits, if you were as rich and handsome as Tom?   I think not!  No fucking way!

REPORTER: How did you feel when you saw the images of the women and children running from the tear gas yesterday?

PRES. DONALD TRUMP: Well I do say, why are they there? I mean, I have to start off—first of all, the tear gas is a very minor form of the tear gas itself. It’s very safe. The ones that were suffering to a certain extent were the people that were putting it out there.

[2] from the New Yorker article linked above:

In December of 1980, less than a year after Romero’s death, members of the National Guard raped and killed three American nuns and a Catholic lay worker. Over the course of the civil war, more than a dozen priests were murdered.