On March 10th the rent check I’d sent to my landlord was returned to me, without explanation.   I took it to the post office the following Monday to have it re-sent and the clerk who examined the envelope was a very dim bulb.   She studied it for a long time before realizing her supervisor was the only person with the wisdom to do anything for me.

The supervisor was a brusque man, blunt, using the word “sir” like a shit-covered baseball bat he casually waved around as we spoke.  A machine had made a mistake, sir, not a human.  Have you never made a mistake, sir?   I can’t guarantee anything, sir.   The machine will hopefully do better after I draw arrows on the envelope.    I can’t give you a receipt, sir, unless you pay me.   You want to make a complaint, sir?   Knock yourself out, call the number on PS Form 3849, here you are.  Complain away, sir.   That’s really all I can do for you.  Tell ’em Umar treated you badly, sir.

I did not react particularly well to this fucking lying asshole (the number on form 3849 does not allow a caller to make a complaint of any kind), and some might say I deserved what I got, the rent check to my landlord returned to me a second time, almost a week later.  In the meantime I’d made a complaint, a guaranteed confidential one, that I was promised would be followed up in two to four business days.   A few days later I learned the confidential complaint had been forwarded to Umar himself to investigate and resolve.  In the end I went to another post office, paid postage again and sent the check to my landlord.  It arrived, I was told, on March 23.

On March 26 I had a message from a woman who seemed to have a hard time pronouncing her own last name.  The voicemail was recorded at 3:10 pm.   She said: Hi, this is Kathy … at Inwood post office, in reference to your complaint, your service issue.  Please call me tomorrow, I’ll be leaving at three today.  Call me at 212-567-7821 in reference to it.   I want to go over it before I close the case out.  Thank you.

The phone rang, at great length, when I called back the next day, each time I called.  Nobody ever picked up.   Not a business you’d ever like to deal with again.

Then I had this email, under the subject “Your feedback is vital to serving you better” and immediately thought of the grinning Martian chirping ‘we come in peace’ as he vaporizes your genitals with a death ray. 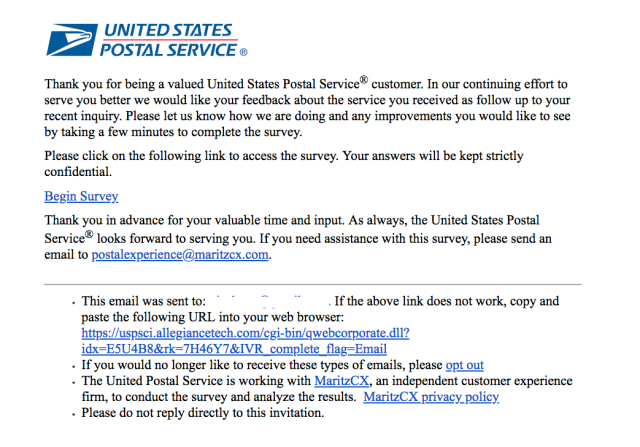 Another great public/private partnership, working harder to serve you better.  Would you like to take a survey for the service you are about to receive?  LOL!

It reminded me of many things, including the almost two hours I’d spent the other night trying to resolve an ATM error.  The machine sucked my $100 bill into the “checks only” slot, a second before I noticed that this machine, unlike any other at this bank, had a “cash” slot on the other side of the keyboard.  No receipt, no return of the bill.  Almost two hours on the phone with poorly paid, ill-trained, overworked women who apologized and thanked me over and over for being a preferred customer, as they placed me back on a brief hold while they waited for someone from claims to come on the line.  The four bar loop of hold music that they unfortunately had no control over played demonically, over and over and over.

It was not until two days later, when I called and spoke to another rep, that I had the $100 ‘provisionally credited’ back to my account.  I’d told the kid that being apologized to and thanked as a ‘preferred customer’, while being treated like a grifter trying to shake this bank down for $100, after years of no such desperate acts, was kind of a crappy way to do customer service.  Imagine if I was not a “preferred customer”!   The kid got it, and as far as I can tell, fixed it.

The first thought I had with this ‘preferred customer’ shit was echoed by this dark, dark, puckish (to my sick mind) entry in Wikipedia for one of the few German words I have committed to memory:

Fuckin’ A, yo.   Nazi perspectives, indeedy.  Getting a lot of those perspectives lately, from some very fine people, the finest people, the best people.  You got a problem with Nazi perspectives?   Call the complaint number on PS Form 3849 and please hold for a customer service survey that will only take ten minutes and will help us serve you better!