It is well known that this most excellent president we have now was the first American president elected by smart social media use, a constant stream of tart tweets and fierce facebook postings, as well as incendiary stories about his enemies on the internet and television, that galvanized his supporters.   What is less well known is how exactly this media tsunami was accomplished.   Answering that question, including whether any illegality was involved, is part of the ongoing investigation against this persecuted public servant, victim of the greatest American political witch hunt of all time, according to him.

There was a perception in the summer of 2016 that Trump would lose the general election, in spite of his easily bumping off one after another of the Republican contenders and winning the nomination at the convention.  A reclusive right wing billionaire, formerly a Ted Cruz supporter, threw his support behind the controversial Republican nominee and had his daughter make some introductions to the candidate, including Kellyanne Conway and Steve Bannon.  Trump hired them both and the rest is history.  Steve Bannon is, among other things, an expert in the field of galvanizing young white men via social media.   Robert Mercer, the billionaire who financed Bannon, Breitbart News, and later Trump, is a well-documented genius in data analysis.  After Trump’s Electoral College victory, Mercer’s daughter, Rebekah, became an executive on Trump’s transition team, advising him on cabinet picks.

Facebook, recently revealed (involuntarily, as it turns out) that it took $100,000 in ad buys from Russian troll farms.   Trolls are those who live to stir up shit on the internet, make people angry, muddy conversation, make rational exchange and civility impossible.   These facebook ads directly targeted those who hated Hillary.  They were then blasted out by hundreds or thousands of ‘bots’, mechanical devices that mass deliver thousands of copies of things like tweets and facebook posts.  You see numbers as part of each tweet showing how many times it was shared, how many times it was liked, how often it was retweeted.  Trump’s incendiary tweets were always liked and shared by millions.  Turns out many of those likes and shares were generated mechanically, by troll bots, here, there and anywhere.

A BBC reporter, in March 2017, ran down how the internet sensation was whipped up. 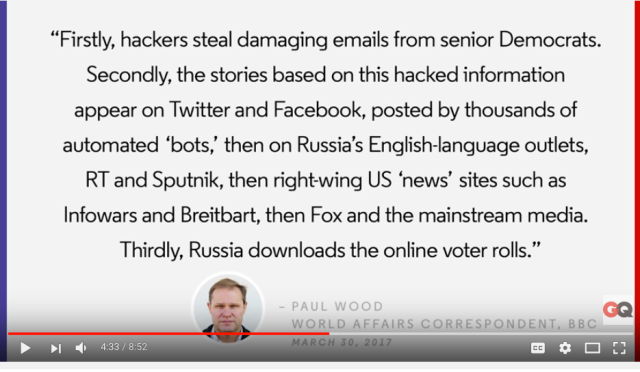 This all seems to make a sinister kind of sense, if you proceed from the proposition that a winner will do whatever is necessary to win and that no trick is dirty or clean, unless you lose, or get caught.   But what is this shit about online voter rolls?

That makes sense.  You want to target people who may be leaning your way.  It’s basic marketing.  Confirmation bias and all that.  Voter rolls would also be helpful in knowing exactly which districts to put ad resources into.  It is well-known that the president’s people very effectively, one might say ingeniously, micro-targeted the exact precincts the presidential candidate needed in three swing states to win all those Electoral College electors by a total of 78,000 votes.

He’s not to everyone’s taste, though Sekhnet always gets a kick out of him, and I find him bright and credible, but the source of the screen shots above, and the full story, is here.