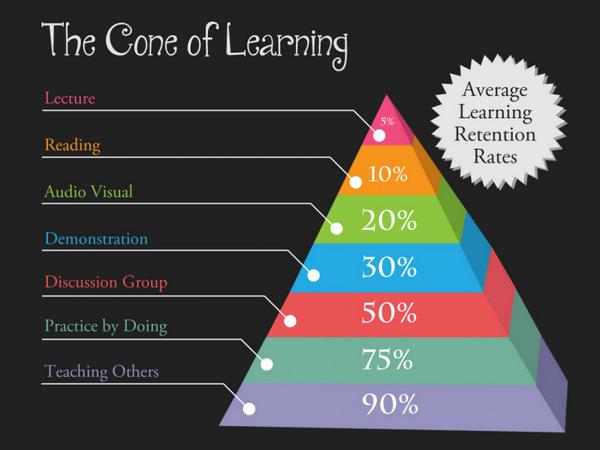 This convincing, and intuitively true-looking baby, it turns out, is a tissue of bullshit.   The impressive, invented percentages were apparently put in by someone using Edgar Dale’s illustrative Cone of Experience.  Based on the famous maxim from Confucius:

I hear and I forget,
I see and I remember
I do and I understand

An example of the false “cone of learning” attributed to Dale

Dale’s “Cone of Experience,” which he intended to provide an intuitive model of the concreteness of various kinds of audio-visual media, has been widely misrepresented. Often referred to as the “Cone of Learning,” it purports to inform viewers of how much people remember based on how they encounter information. However, Dale included no numbers and did not base his cone on scientific research, and he also warned readers not to take the cone too seriously. The numbers may have originated as early as the 1940s, when a scholar at the University of Texas at Austin created visual aids for the military.[5] [6]

Albert Goering, looking elegant in this studio portrait from the early 1930s, was the brother of Nazi number two (literally– big, unflushed number two) Hermann Goering. Albert was quietly but resolutely anti-Nazi, and actively saved people during the Thousand Year Reich.  He was on the Gestapo’s radar several times, but Hermann stepped in to squash the investigations.  After the war he was imprisoned and interrogated with the rest of the war criminals at Nuremberg.  He was locked up for a long time before people he saved began to come forward and he was eventually released.  The rest of his life was pretty much fucked– his name was Goering.